A Message from The Founder- Ata Servati 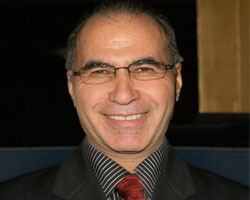 A Message from The Founder- Ata Servati:

Children are gifts from God.

Imagine a world where Jewish and Palestinian are able to simultaneously march to the border, ignoring soldiers and guns, and meet to express their love, tolerance, and respect for one another. Just imagine how beautiful and peaceful life would be.

Imagine a world where Muslims and Hindus can come together as one in Pakistan and India. Forgetting their differences and struggles and standing together, as the great Gandhi had wanted. Imagine a world where the money we use to pay for war is instead used to educate those involved in war. Using the money to build hospitals, schools, daycare centers, and universities. Educating children on the importance of love, peace, tolerance, respect, kindness, and acceptance.

Imagine a world where the money spent on competing to build bigger and more lavish places of worship, was redirected to feed the thousands of children that die from hunger every day. What a world this would be.

Imagine if all religions adopted the basic principles of simplicity, humbleness, and humility that are found within all religions, instead of competing and denying each other equality. What a peaceful world we could offer our children.

Let's remind ourselves that greedy, madmen that call themselves leaders, hijack our religions, ideology, and philosophies to further their greed, wealth, and power. Leading our innocent children, the wealth and foundation of our future, into abusive child labor, prostitution, poverty, and saddest of all, brainwashing them! Look all around you, there are wars being fought to prove whose religion and beliefs are right?! Ask yourselves, is that what the principles of our human race are all about?
Teaching our children to hate, kill or fear one another based on different beliefs?

Let's remind ourselves that sadly, at this point in time, we as humans have placed ourselves at the edge of destruction. Risking not only the death of ourselves, but of the Earth as well. Some religions have spread like wildfires. They are being abused, altered, and misinterpreted time and time again. They have led our children down precarious paths of twists, turns, and confusion.
Lets remind ourselves, we as humans are alive to bring peace and love to the world.

Let's remind ourselves, we hold certain principles and belief systems to keep us grounded. Helping us to achieve these important principles.

Let's remind ourselves, we choose different paths such as religion, ideologies, and philosophies to guide us to be better human beings.

Let's remind ourselves, religion is the manifestation of God's wishes for us. It exists to make the world a better place. To further us as human beings by spreading love and respect. To teach us to control our minds, bodies, and souls. To allow us to gain wisdom, tolerance, and respect for one another's beliefs and existence.

Let's believe and remind ourselves, that devotion to a religion is a deep and personal choice. A choice not forced by any government, person, or organization. This choice, this desire, can be respected and loved. A choice free of any influence orpressure to follow what our parents, elders, or leaders believe. All people must be free to search and choose their own path, to match the vibration that emanates from them. We are all on different journeys and have different lessons to learn, and thus will need different things.

Let's remind ourselves, we are at a crucial point in our world's history. A time to stop and think and separate the good from the bad. To remind others and ourselves that manipulating innocent children, while promising them Heaven and salvation is wrong. We have a responsibility to lead our children, allowing them to choose their own path and beliefs to follow. We all have something unique and magical to contribute. We can be the difference for future generations. We can practice LOVE, RESPECT, PEACE, TOLERANCE, FORGIVENESS, KINDNESS and UNDERSTANDING for one another regardless of our RELIGIOUS BELIEFS or NATIONALITIES.

Let's believe that LOVE is the way to be a better soul.

Let's believe that PEACE will give us a chance to heal the problem.

Let's believe that TOLERANCE is the way to understand one another.

Let's believe that UNDERSTANDING is the way to know one another.

Let's believe FORGIVENESS is the best medicine for healing our soul.

Let's believe KINDNESS and CARING for others are the way of humanity.

Let's believe that we can replace the hatred, violence, and unholiness, in our hearts with love, peace, harmony, in our souls.

Let's believe a child holding a camera, catching the mysteries of the earth, is less likely to destroy it.

Let's believe a child who dances to the beat of their own heart will protect the hearts of others.

Let's believe a child who hears and makes music will reject the sounds of pain and agony.

Let's believe a child who writes in rhyme, will help bring harmony to the world through words.

Let's believe a child holding a book in his hands is less likely to hold a gun.

Let's believe a child who cherishes the moment will not demolish it.

Let's believe a child painting on canvas with the colors of life is less likely to take a life.

Let's believe by achieving these goals, we will gain BALANCE, HARMONY and the greatest gift of God, HEALTH.